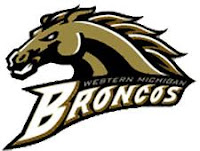 Coming off a pair of road losses to Miami, a home-and-home series with Bowling Green looked like just the ticket to get Western Michigan right back into the thick of the race for the top spot in the CCHA.

On Friday, comfortably at home at Lawson Ice Arena, Western Michigan jumped to a 3-0 second period lead on a pair of goals by Dane Walters and a single by Greg Squires and coasted to a 4-1 victory over the Falcons.

“I think this was a big win for our time,” said Western Michigan head coach Andy Murray. “Coming off a couple of defeats last weekend, we need to get back on the winning track. Bowling Green wears their jerseys with pride, too. They work hard and we talked about that before the game. I reminded them of that after the second period.”

That Bowling Green pride showed up in Saturday night's rematch.

Playing at home, the Falcons responded to Squires' early first period goal with a pair of third period goals of their own to edge the Broncos, 2-1. Bowling Green netminder Andrew Hammond blanked the Broncos with 28 saves after allowing Squires' goal at 1:21 of the first period.

The weekend split left Western Michigan tied with Miami for second spot in the CCHA standings while holding two games in hand over the RedHawks. The Broncos only trail league-leading Ferris State by one point as they await the arrival of Alaska for a two-game set Friday and Saturday.
Posted by Matt Mackinder at 11:25 AM