Wolverines get nod from '91 stud 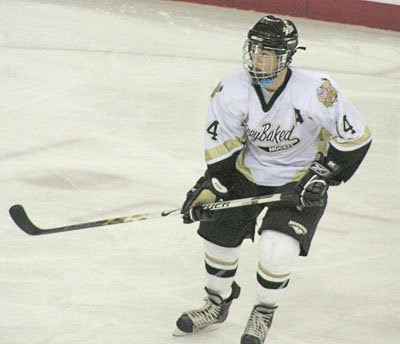 With a spanking new driver’s license in his pocket, the Grosse Pointe Woods resident uses his newfound freedom to cruise Lake Shore Drive, and in his spare time, he plays golf at the local course or plays street hockey with his friends.
But Lynch is anything but typical; he’s an exceptional hockey player who has recently made some big decisions regarding his future, including his immediate future and his collegiate choice.

His first decision was whether to play for the Plymouth Whalers — which drafted him in the 3rd round of the 2007 Ontario Hockey League Priority Selection — or accept an invitation by the U.S. National Team Development Program for the 2007-2009 training seasons in Ann Arbor.
Although he was thrilled to be chosen by the Whalers, he has decided on the national development team.
“Although Kevin was honored to be drafted by Plymouth, he has chosen, for the time being, that he’s not going to be playing there,” said Mike Lynch, Kevin’s father. “He wants to keep his options open about being able to play in the NCAA, and if he played for Plymouth, he would lose his NCAA eligibility.”
So this fall, he’ll be moving into a billet home in Ann Arbor and attending Ann Arbor Pioneer High for his junior and senior years.
One stipulation of the U.S. NTDP is that you must board within a 20-mile radius of its facility in Ann Arbor or live with a billet family, which Lynch said most boys in the program choose to do.
“I’m going to miss my family and friends, and the community,” said the talented center. “But I’ve always said I want to come back and settle down in Grosse Pointe.”
The second life-altering decision will be finalized in a year or so, when he’s officially allowed to make a formal commitment to play college hockey. Though several top-notch hockey schools have shown an interest, including Notre Dame, Michigan State, Boston and Wisconsin, Lynch said he has verbally committed to the University of Michigan.
“It’s close to home and a lot of family members went there and encouraged me to go, too,” Lynch said. “It was a perfect fit.”
As for what he will study at Michigan, Lynch said he hasn’t given it much thought.
“My parents keep telling me to decide what to do, but I can’t imagine myself doing anything but hockey.”
Lynch got his start playing at age 5 in the Grosse Pointe Hockey Association, but he’s been skating even longer than that.
“My mom put me on skates when I was 2 or 3,” Lynch said. “I think my first pair were figure skates.”
From there, he played center for the Detroit HoneyBaked AAA organization from ages 10-16.
“I just loved playing,” Lynch said. “I never knew I’d be good enough to make it anywhere, but I also couldn’t see myself being away from hockey for a second.”
You can reach Sue DePassio at sdepassio@candgnews.com or at (586) 279-1107.
Photo courtesy Mike Lynch
Posted by Matt Mackinder at 2:40 PM