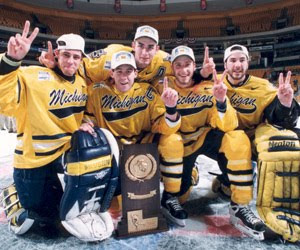 As an eight-year NHL veteran and 1996 and 1998 NCAA Division I national champion with the Michigan Wolverines, Bill Muckalt now resides in Valencia, Calif., and has been named the head coach of the Valencia Flyers Junior A team in the Western States Hockey League.
Having played with the Vancouver Canucks, New York Islanders, Ottawa Senators and most recently with the Minnesota Wild, Muckalt has had the opportunity to play for and learn from some of the best coaches in the game today, including Mike Keenan, Jacques Lemaire, Jacques Martin and Red Berenson.
During his career, Muckalt, a ninth-round Vancouver pick in 1994, was considered a power forward with a knack for the net. He was the runner-up for the Hobey Baker Award in 1998 and was twice named the NHL’s rookie of the month in the 1998-1999 campaign.
As the new head coach of the Flyers, Muckalt brings a tremendous amount of experience and knowledge to the program. His philosophy is that of a well-conditioned, well-disciplined team with his focus being on hard work and integrity. Having had success at Eastern Michigan University first as an assistant and then as a head coach, Muckalt knows what it takes to make a hockey team successful.
“I am looking forward to the opportunity I have here to not only bring a WSHL championship to Valencia, but to be able to grow hockey in general for southern California," said Muckalt. "I am excited to get started and am truly looking forward to working with not only the core from last year’s team, but all of the new talent that we will be bringing in this season.
"I am truly amazed at the talent not only here at the Ice Station, but in southern California as a whole.”
Photo - 1998 Michigan senior class (left to right: Gregg Malicke, Matt Herr, Bill Muckalt, Chris Fox, Marty Turco) - courtesy University of Michigan
Posted by Matt Mackinder at 9:50 PM