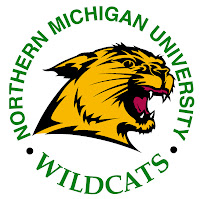 Northern Michigan returned to Marquette with a bang last weekend. The team won two decisive games over University of Nebraska-Omaha for its first sweep of the season, winning 5-1 on Friday and 6-3 on Saturday.

UNO notched a power-play goal early in Friday's game, and Northern controlled the game for the rest of the night. Justin Florek scored the first goal (with assists from Mark Olver and Phil Fox) to tie the game going into the first intermission.
The Wildcats started the second period on the power play, and Gregor Hanson and Erik Gustafsson set up Florek for his second goal of the night. Late in the period, Olver widened the lead to 3-1 with some help from TJ Miller.
Northern outshot UNO, 19-12, over the first two periods, but the Mavericks fought hard in the third period and outshot the Wildcats 12-11. But only the 'Cats could find the back of the net. Hanson scored at 10:20 of the third off a pass from Ray Kaunisto, and Kaunisto then helped set up Chad Pietila for his first collegiate goal to set the final score at 5-1.
Brian Stewart had 23 saves in Friday's game.
The Mavericks drew first blood again in Saturday's contest. They were up 2-0 at the end of the first period. Tyler Gron got the 'Cats on the board early in the second (Hanson and Andrew Cherniwchan assisted), and then Hanson knotted up the game at 14:03.
Olver put the 'Cats ahead on an unassisted shorthanded goal - the 'Cats' first of the season - late in the second.

The Mavericks tied the game in the third period, but Northern responded with two unanswered goals courtesy of Fox and Kaunisto. Olver banged in an empty-netter for the final score of 6-3.
The Wildcats were outshot 31-37 by the Mavericks, and Stewart finished with 34 saves.
The Wildcats improve to 5-5-2 and 4-3-1-0 in CCHA play. Northern heads back on the road this weekend as they'll play the University of Alaska-Fairbanks on Friday and Saturday.
Posted by Susannah Nichols at 6:21 AM