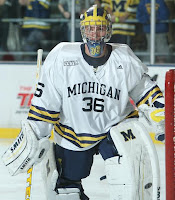 The University of Michigan presented its annual team awards to eight players while also announcing its captain for the 2009-10 campaign at the annual Dekers Blue Line Club Banquet on Saturday night at the Ann Arbor Sheraton.

Head coach Red Berenson named rising senior defenseman Chris Summers as the captain for the 2009-10 season. Summers began the 2008-09 season as an alternate captain before being elevated to co-captain in October. Alternate captains for 2009-10 will be named in the fall.

The 2008-09 Wolverines received an NCAA Tournament bid for a 19th consecutive season, extending a national-best streak. Overall, Michigan earned a record of 29-12-0. Its mark of 18-10-0 in CCHA play was good for second place. U-M also finished in second place at the CCHA Tournament. In December, the Wolverines repeated as Great Lakes Invitational champions.

Summers picked up the Vic Heyliger Award as the team's outstanding defenseman. Summers was second among U-M's blueliners in points (17), plus/minus (+17) and blocked shots (34). His 13 assists and 17 points were career highs. Summers received All-CCHA honorable mention and was a finalist for the CCHA Best Defensive Defenseman award.

Freshman forward David Wohlberg received the Dekers Club Award as the team's most colorful rookie. Wohlberg was the CCHA Rookie of the Year and earned CCHA All-Rookie team accolades. He was second to Caporusso on the team in goals with 15 tallies and finished fourth overall in points (30).

Senior forward Danny Fardig earned the Howard Colby Award for sportsmanship as determined by his teammates. Fardig collected just 10 penalty minutes in 31 games yet still managed to play a hard-nosed, defense-first style. He set career highs in points (9) and assists (7) and was +10.

The Joseph E. Barss Award, which is given to the best team player as determined by the coaching staff, went to senior goalie Billy Sauer (pictured). The netminder posted a 5-6-0 record with two shutouts in his final season. He had a 2.02 goals-against average and a .921 save percentage.

The Alton D. Simms Award for the team's most improved player went to freshman forward Luke Glendening. Recruited to join the Wolverines as a walk-on, Glendening played in 35 of 41 games, including each of the final 24 contests. He potted six goals, including three game-winners, in addition to four assists for 10 points.

Sophomore forward Carl Hagelin received the Carl Isaacson Award as the team's top player in the classroom. Hagelin is enrolled in the School of Kinesiology and was U-M's representative on the CCHA Scholar-Athlete Team. On the ice, Hagelin had an impressive season, setting career highs in points (31), goals (18) and assists (13). He was U-M's third-leading point getter.

The Ray Helber Deker of the Year Award went to Chuck Raab for his efforts to support the Michigan hockey program.